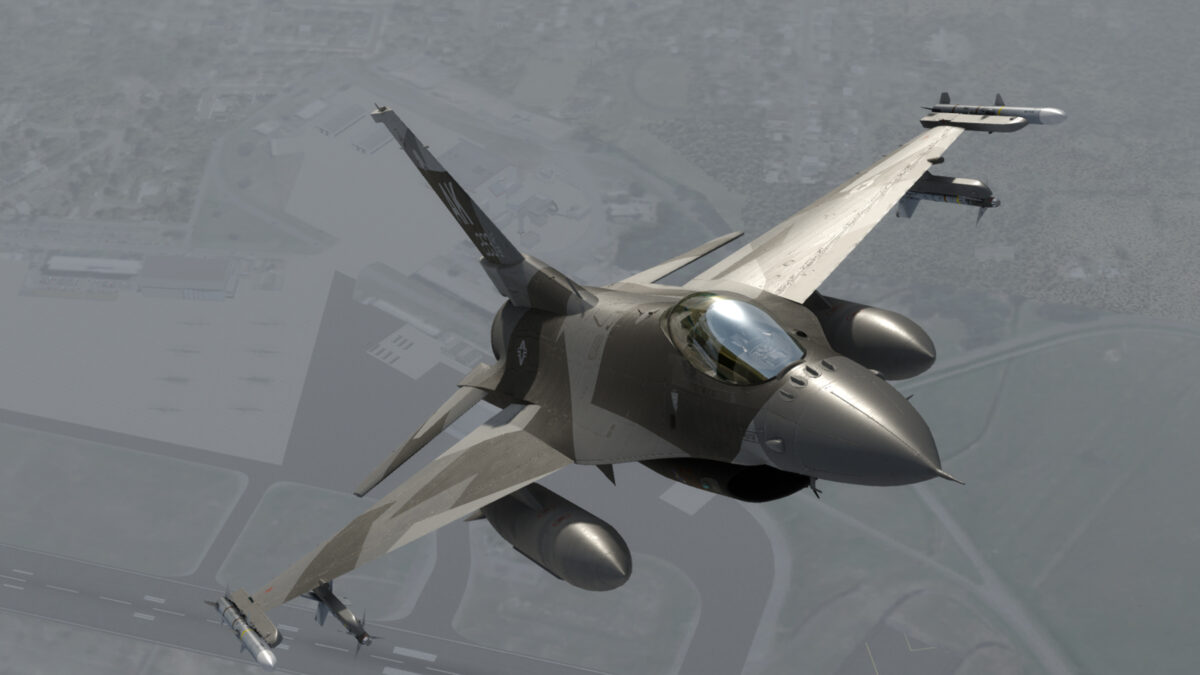 The F-16C Viper: A fighter whose capabilities are only outclassed by its G-limit

In use by the following:
AF ROTC

Being the ‘low’ to the F-15’s ‘high’ the F-16C is the jack-of-all-trades of the USAF’s current fighter fleet. Capable of air-to-air, air-to-ground, SEAD/DEAD as well as air defense and interdiction, there is little that the Viper can’t do. The aircraft was originally fielded operationally in 1980 and with continuing upgrades to its avionics and weapons, has been a staple of the fighter fleet ever sense.

With a normal limit of 9.3g, a top speed of Mach 2.05 at altitude, and a thrust-to-weight ratio exceeding 1.0 in some configurations, the F-16 is the true hot rod of any hangar.

Our F-16C models the Block 50 and Block 52, along with the F110-PW-229 and F110-GE-129 engine types in the fidelity you’ve come to expect from our Advanced Series of products, building off the technology and experience that have led to both our T-38C and T-38A products being perfected for the training needs of the USAF.

Featuring a high-fidelity flight model, highly-accurate and painstakingly modeled interior and exterior models, along with a custom soundset recorded from a real F-16, we believe that our rendition of the F-16C will be the defining simulation of the aircraft, bar none.

Our rendition of the F-16C is the latest in our line of Advanced Series products and represents one of the highest-fidelity simulations of a fighter jet to exist within the P3D/ESP environment. Our rendition of the F-16C aims to please even the most hard-looking, -1-obsessed combat simmer; no matter the situation the aircraft is put in or the phase of flight, you can expect hyper-accurate, physics-based results.

Designed by an aerospace engineer with extensive experience in the simulation world and collaboration in other famed titles, the new Advanced Series F-16C features a 100% custom physics and flight dynamics engine (FDE). Aside from bringing in a new level of accuracy in terms of flight dynamics modeling, it lacks the traditional and well-known MSFS / P3D FDE limitations.

The engine dynamics and performance characteristics of both included engine types are accurately represented, as well as custom ground dynamics and structural modeling being implemented. As a testament to our approach, the ‘big mouth’ Block 50 has a higher drag penalty due to its larger intake when compared to the ‘small mouth’ Block 52. It’s the little things that make the biggest difference to the experience, and all of these nuances are present thanks to our physics-based philosophy.

As result of the accurately modeled physics, our F-16C matches the figures available for the real aircraft in terms of flight envelope, fuel consumption (range/endurance) and energy maneuver diagrams.

The flight control system for our F-16C is custom-created to match the real aircraft to an exacting T. The real F-16 is famous for its relaxed static stability, which enables high degrees of maneuverability at the cost of reduced aerodynamic stability. These qualities are faithfully recreated in our simulation, and you will find that the G onset is as fast as you can pull! In addition to the peculiar aerodynamic qualities, our simulation also includes a comprehensive recreation of the F-16’s FLCS, along with its various limiters and protections. All control laws of the FBW system have also been replicated, coming into play at their appropriate times and with their accompanying G, pitch and roll rate limitations.

A completely custom and very in-depth failure system has been created for the F-16C. The failures model affects a wide-ranging array of systems, including the airframe, engines, landing gear, hydraulics, flight controls, and the flight control system. Forced or random failures are possible, with random failure probabilities adjustable to realistic values based on actual fleet maintenance data.

Damage is also possible due to exceeding real aircraft operating limitations. Icing is another source of possible damage, with possible engine damage occurring from flight into known icing conditions without anti-ice systems active, causing ice accrued on the engine intakes detaching and being ingested by the compressor. Ice may also accrue on the airframe, causing a degradation of handling qualities and performance. Last but not least, possible bird strikes may occur based on real data for military aircraft, with damage severity and systems affected based on a probabilistic system.

An aircraft whose mission roles are as varied as the Viper’s demanded a payload carrying capability to match, and we have spared no expense to bring you the greatest choice in payload options.

We didn’t just include weapons either, quite the opposite; in addition to underwing and conformal fuel tanks, we have included, for the first time ever in a civilian platform, both the Sniper and Harm Targeting System (HTS) target pods have been included, along with the ALQ-184 ECM pod.

Our MVAMS utility runs outside the simulator providing the means to incrementally update individual products to quickly address issues and make fixes when required, without having to have our customers download and reinstall new versions of the aircraft. This allows our customers to quickly discover and install any pending updates for their aircraft, ensuring that they are completely up-to-date with our latest fixes, changes, or technology.

Aerodynamic model based on NASA data